Book Direct with the Owner at Goondiwindi War Memorial with Accommodation BNB in Goondiwindi, for all your Attraction and travel needs.

A towering soldier statue now found in Goondiwindi's Town Park was one of the most expensive soldier monuments marking WWI in Queensland. Governor Sir Matthew Nathan unveiled the six metre high memorial in September 1922 while in the south-west border town to observe an eclipse of the sun. The life-sized grey sandstone soldier, standing on top of a red and grey polished granite column, polished blocked trachyte pedestal and a stepped concrete base, cost £1,800. It was located in Herbert Street at that time. The designer is unknown. The pedestal carries the gilded names of 325 locals who enlisted in WWI-providing invaluable insight into the community's involvement in the war. Of those, 54 (about one in six) died, underscoring the devastating impact the conflict had on a young nation. The soldiers' monument was relocated to the park in 1949. At this time, a set of gates were erected as a WWII memorial, unveiled by Sir Thomas William Glasgow, a Gallipoli survivor who went on to stand up to high-ranking British officers in France, refusing their command to surrender at Villers-Bretonneux. 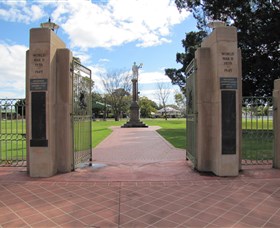 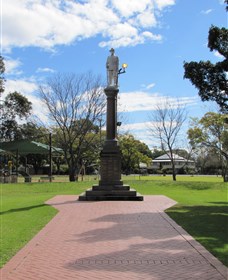 Accommodation BNB welcomes Goondiwindi War Memorial in Goondiwindi QLD, we offer an experience that takes you on a journey of a life time in Goondiwindi. For all your attraction and things to do, book your adventure today.

Is Goondiwindi War Memorial in Goondiwindi your property on Accommodation BNB, please claim your listing and subscribe to update your contact details and receive your phone calls and emails from your clients.