Book Direct with the Owner at Robert Blackwood Hall with Accommodation BNB in Clayton, for all your Attraction and travel needs.

Named after Monash University’s founding Chancellor, Sir Robert Blackwood, the Robert Blackwood Hall is Melbourne’s most prestigious venue outside the CBD. Acoustically, it ranks with the best available in Australia and, as such, has been the venue for numerous commercial recordings for the ABC, Melbourne Symphony Orchestra and various film scores.

Being a concert hall, it has no proscenium, stage curtains or fly tower. It is completed by the resplendant Sir Louis Matheson pipe organ as well as two full concert grand pianos including one Steinway. 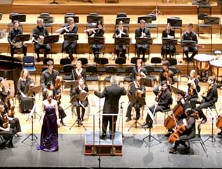 Accommodation BNB welcomes Robert Blackwood Hall in Clayton VIC, we offer an experience that takes you on a journey of a life time in Clayton. For all your attraction and things to do, book your adventure today.

Is Robert Blackwood Hall in Clayton your property on Accommodation BNB, please claim your listing and subscribe to update your contact details and receive your phone calls and emails from your clients.